We build rudders with passion and precision since 1963.

Our focus
Manufacturing Process
Call US

In the early sixties, an innovative man named Chuck Foss developed several polyurethane foam systems useful for a variety of purposes, including the production of surfboards. His new firm, The Foss Company, soon became one of the top U.S. suppliers of foam surfboard blanks, which he sold under the name of “Foss Foam.”

Later in the sixties, one of his Foss Foam systems used to make surfboard skags was found to be an excellent material for making sailboat rudders. It was not long before The Foss Company supplied rudders to most of the boat builders in Southern California through the seventies and eighties.

The Foss Company’s former headquarters. During the eighties and nineties, the company specialized in fiberglass and foam composites. High performance sailboards and paddleboards were some of the products produced. With an extensive inventory of rudder molds, the company now specializes in supplying sailboat owners and boat repair yards with replacement rudders.

In recent years, The Foss Company has formed a strategic partnership with FinCo Fabrication, a major fiberglass manufacturing firm based in Santa Ana, California. This partnership will assure that The Foss Company’s long tradition of quality products and service will continue for years to come.

We make rudders and dagger boards for most sailboats, working with existing molds.
A custom design rudder can be made just for you and your boat.

Our special manufacturing process assures that our rudders are strong, light and dependable, ready for a lifetime of sailing pleasure.
1

Working together with you the owner we select an exciting mold or sketch out a new design for a  custom rudder. All based off years of experience and time tested best practices. 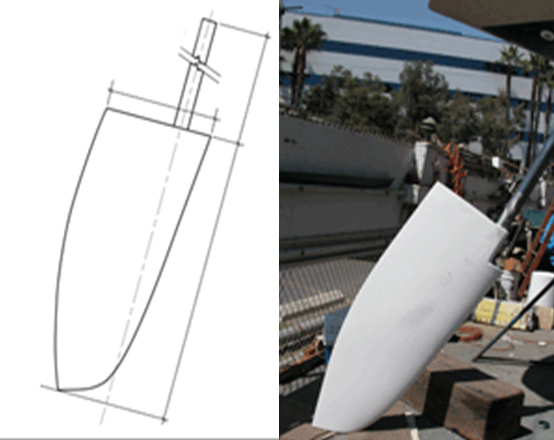 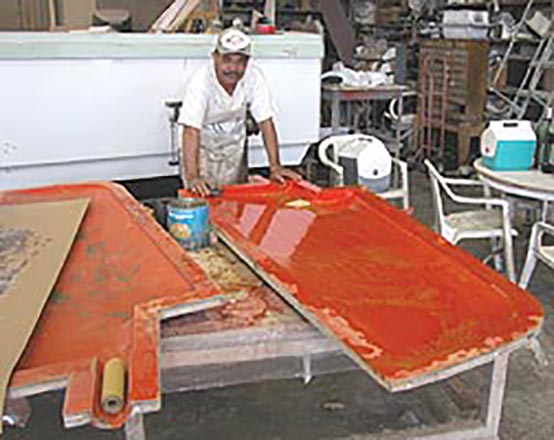 After applying Gelcoat to the mold, they apply a layer of unidirectional fiberglass saturated with Vinylester™ resin. 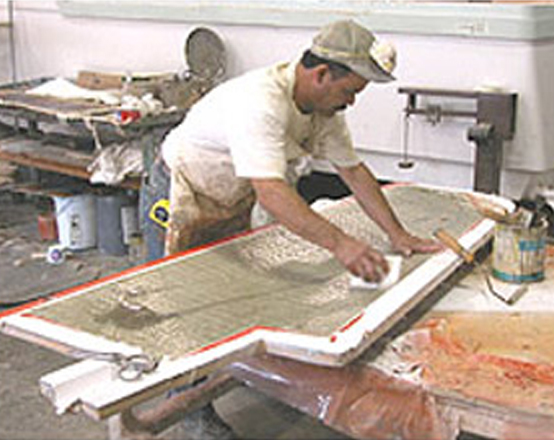 A new rudder shaft is turned from the same material as the original (or stronger.) After it is cut to length and tapered, the tangs are welded into place. 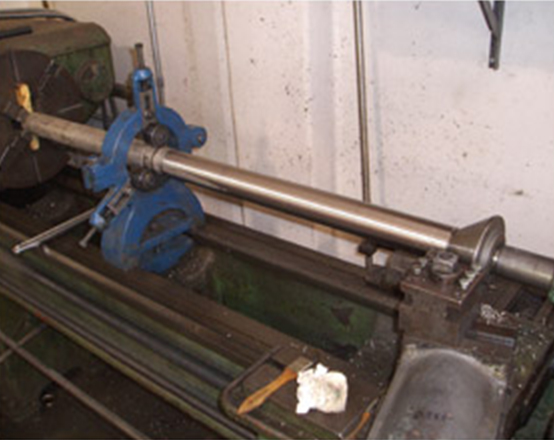 Once the fiberglass has cured, the tapered stainless steel shaft is set into the mold. After the shaft is aligned, the halves are mated, clamped and sealed, and liquid foam is poured into the mold. 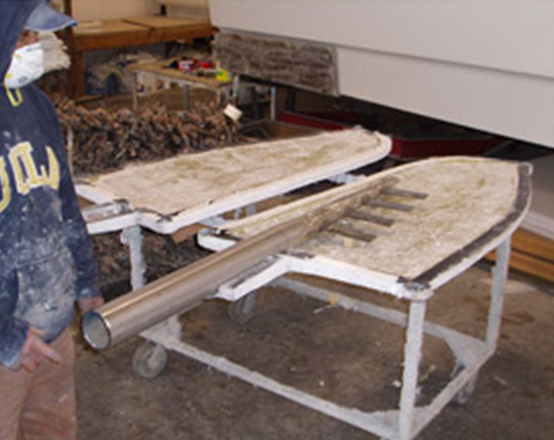 When the foam has cured, the rudder is removed and the seams sanded smooth. Most OEM rudder fabrication stops here; we go farther. 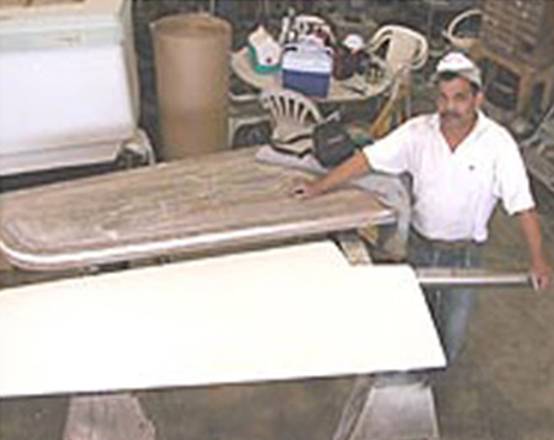 Fiberglass tape is laminated to the seams. After the tape has cured and has been sanded smooth, the rudder gets a final coat of gelcoat. 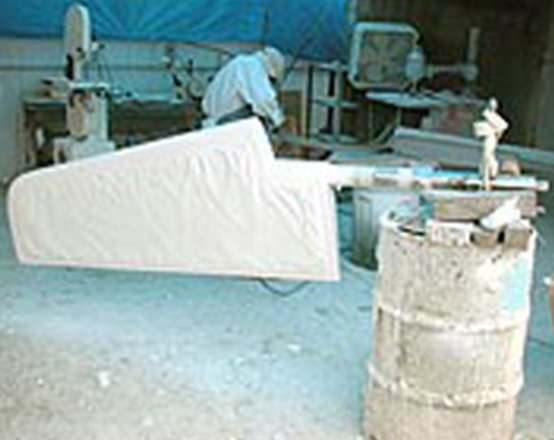 In the last step, the entire rudder is faired and sanded in preparation for you to apply a coat of bottom paint. 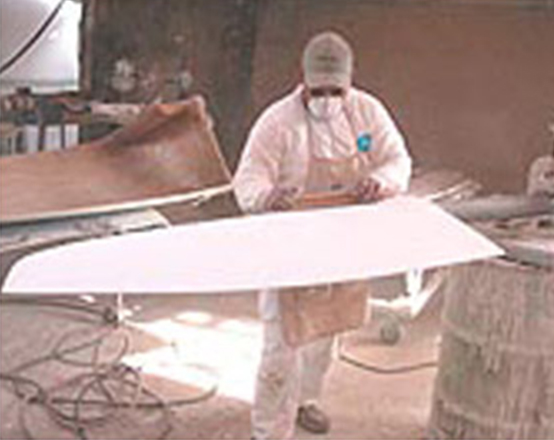 The finished rudder is packed in a purpose-built crate suitable for shipping to you anywhere in the world. 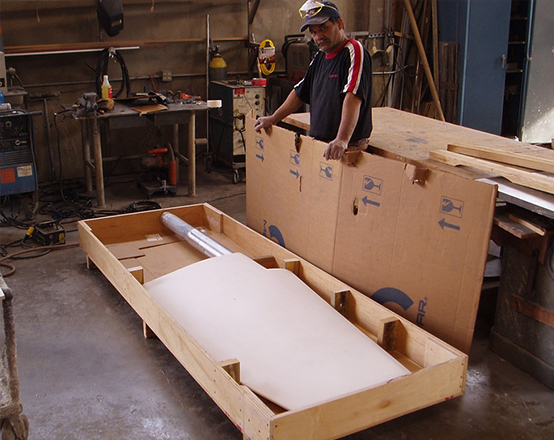 We have many of the original molds and tooling for production boats made over the mast 60+ years in our inventory and can replace damaged rudders with the exact factory replacement. If you would like a custom rudder, we can modify or design from scratch a rudder that meets your exact needs.

The original rudders originally were manufactured by “clam-shell” method and our exact replacements use the same tooling. Plus over the years there have been advances in glass cloth and in laminating resins making them stronger and more reliable. The closed cell foam core of the rudder remains the same, but the selective addition of unidirectional fibers has increased the strength of our rudders, and the use of Vinylester™ resins has eliminated blisters and the need for expensive barrier coats.

Newer designs to improve handling and directional control. This is most important when sailing very fast and can help prevent broaching and spin-outs. Most boats can use upgraded rudders without incurring a rating penalty. Some local PHRF boards will hit some designs with a 3 seconds-per-mile penalty so you should check with your local board before making your change.​

Start your next dream adventure or race with a new Foss rudder.

Foss Rudders fondued in 1963 has partnered with FinCo Fabrication, a major fiberglass manufacturing firm in Santa Ana, California. We make precision rudders for you.

Where to find us